Forbidden herbs? The effects of cannabis were a controversial topic 250 years ago 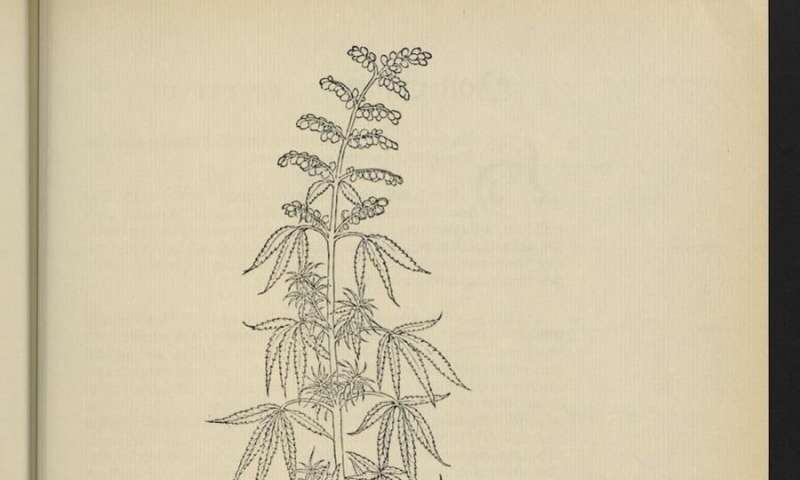 Should cannabis be legalized for medicinal purposes or will it remain an illegal drug? This has been discussed in many countries for years—and has been a point of contention for much longer than expected: Already in Mexico in the 18th century, priest and scientist José Antonio Alzate y Ramírez campaigned for the healing effects of the controversial plant—against the position of the Spanish Crown and the Inquisition. The historian Dr. Laura Dierksmeier from the Collaborative Research Center Resource Cultures at the University of Tübingen examines the public debate at that time in Mexico. Her study “Forbidden herbs: Alzate’s defense of pipiltzintzintlis” was published on July 7th in the journal Colonial Latin American Review.

In a newspaper article from 1772, Alzate defended cannabis, which he knew under the name “Pipiltzintzintlis” from his own cultivation: He attributed it to valuable medical benefits for the treatment of cough, jaundice, tinnitus, tumors, depression and much more. He also considered the hemp plant to be an excellent raw material for the production of ropes for sailing ships. The Spanish Inquisition, on the other hand, viewed the hallucinogen as a means to connect with the devil and had therefore banned it—just like many other psychoactive plants or behaviors that were said to contradict Christian principles.

José Antonio Alzate y Ramírez (1737—1799) had a mission: He wanted to bring science and knowledge of nature to the Mexican public. Over the course of his life, he was the editor of four newspapers, a member of the Royal Botanical Gardens in Madrid and a corresponding member of the French Academy of Sciences.

Alzate’s evidence of the benefits of medical cannabis ranges from personal experience, reports from indigenous people and sailors to medical encyclopedias. “What is particularly impressive is the range of sources from the 18th century that support medical marijuana consumption,” says Laura Dierksmeier. Alzate mentioned well-known scientists of the time,such as the natural scientist Jacques-Christophe Valmont de Bomare, the physician Michael Etmüller, the doctor and co-founder of the “Royal Society of London” Thomas Willis as well as the doctors Guy-Crescent Fagon and Engelbert Kämpf.

The historian also examined other sources from this period that were not cited by the Mexican researcher because he had no access to them or did not speak the language. For example, the Physician and Botanist Jacobus Tabernaemontanus, who in his “Neuw Kreuterbuch” of 1588 advises women to use cannabis to relieve abdominal pain, or the first known English-speaking advocate of medical cannabis use, Richard Hooke.

“Alzate’s public defense of the forbidden herb exposes larger issues debated in Mexican society,” says Laura Dierksmeier, assessing the complicated role of the priest-scientist. “He was a tireless mediator between church authorities and civil society, between the Spanish Inquisition and his own scientific observations, between scientists and the public, and between indigenous and European knowledge. Alzate’s methods were European and typical of the Enlightenment, but his mission and focus were Latin American: He was proud of Mexico’s natural environment and promoted the use of indigenous herbs, even if that meant defending them from the Church’s prohibition.”

The historical example shows that legalizing marijuana has long been a controversial issue. However, critics of the ban were threatened with exile or the death penalty. Early modern researchers took great risks to publish information that they thought served the general public. Alzate himself did not have to pay for his publications with his life, although three of his newspapers were censored and eventually discontinued to silence him in public.

“The findings of the study can help broaden the current legalization debate and soften the hardened fronts,” says Dierksmeier. “According to Alzate and the scientists he quotes, the benefits of the hemp plant as a building material or medicinal plant outweighs the possible side effects. Or as José Antonio Alzate y Ramírez wrote: ‘I think I have demonstrated the benefits of using Pipilzitzintlis and, in the words of the theologians, it is bad because it is forbidden, not forbidden because it is bad’.”